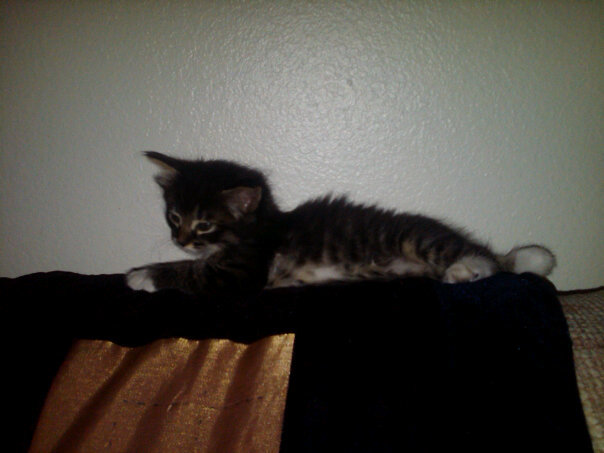 The best discription of Darla there is… “She is a crazy pretty cat and a pretty crazy cat.” She is one of my favorite beings in this world.

Darla was a box kitten. She was found in an alley in Tucson AZ with 2 other small babes. The friend of mine that found them could only take two and one little crazy kitten needed a home.

My big black Chow Chow/ Lab Anya had just been evicted from my apartment because she was a sweet bundle of anger, would bark too often and slam herself against windows while I was at work… Which was a graveyard shift at the time. So I was now lonely without Anya and needing a new friend. I had never been into cats. I considered them to be very dickish and not fun. Turns out I was only kinda wrong…

Darla as a kitten was super fun and playful. Always wanting to be right next to me and everywhere else at the same time.

Darla’s Likes; scratching, clawing, treats, window watching, belly rubs (But only when she says it’s okay.), mommy and daddy sometimes and being in the bathroom with everyone…

Darla’s Dislikes; Basically everything else in the world… But she does tolerate quite a lot I have to say.

Today Darla is doing super well and still rules her castle even with crazy Loretta causing a ruckus.

Ha ha ha! I’ll start getting some more photos of her for y’all. She’s super fluffy…

A cooking survival guide for those who don't know how

A regular gal who likes to stop and smell the flowers.

Surviving a life with Endometriosis.

You can WIN it.

Inspiration to Make Every House a Home